There has always been a mill on John Ellingwood Road in Buckfield. In 1985, Earl Turner sold the mill to Calvin F. Wells. Operating as CF Wells Inc. (a name still used by some of our customers and vendors!), Calvin and two employees started producing crutch handles on one spool machine. Over time, Calvin added a second spool, two automatic or variety lathes, a Hempel machine, and a hand lathe.

William Lamarre joined forces with Calvin in 1988. Over the next several years, the business built a finishing area, a machine shop, three kilns and an administrative office. More turning and secondary capabilities were brought in, and a dust collection system was developed. By summer 1993, CF Wells had 10,000 square feet of warehouse space and employed 45 people.

Fire destroyed the original mill in May 1994. In its place, Calvin and Wil erected a new metal building, with a new boiler and feed system. They dedicated the building to Clifford and Elaine Bradley, former employees and close friends of Calvin. This building is now known as the Bradley Mill. Buckfield resident Ruth Scott painted a picture of the former mill (see above), prior to the fire. Her painting is prominently displayed in our office today. 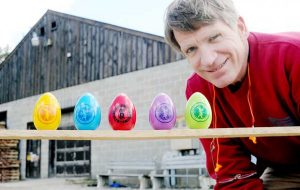 After Calvin passed away in 1995, Wil became sole owner of the mill and operated the company successfully until selling to Tom Wallace and Alan Chesney in November 2003. Tom and Alan changed the company name to Wells Wood Turning & Finishing Inc. Seeing the need for improved business systems and controls, Tom and Alan introduced software applications to manage quoting, manufacturing orders and accounting processes. In 2013, Tom and Alan acquired the assets of Black Bear Wood Products and Black Bear Bats, adding back knife capabilities to mill operations, as well as many new customers. It was during the course of Tom and Alan’s ownership that Wells Wood Turning become well known as the supplier of colorful wooden eggs for the annual White House Easter Egg Roll. Wells provided the eggs for many years through the presidencies of George Bush and Barack Obama.

In November 2016, Tom and Alan sold the mill to Chris Chandler and Simon Varney, who operate the business as Wells Wood Turning & Finishing.